The University supports the principle of equal pay for work of equal value. We were one of the first universities to introduce an Equal Pay Policy and we publish annual Equality, Diversity and Social Responsibility reports which describe the wide range of activities and initiatives that the University is involved with every year to celebrate and promote diversity.

We have conducted annual Equal Pay Audits since 2003 and have been cited by the Equality and Human Rights Commission. These audits complement our aims of fairly rewarding staff, increasing efficiency and enhancing our reputation.

In 2017 the Government introduced a new duty for organisations to report their Gender Pay Gap. They use a standard approach which is slightly different from the one we have used previously (a wider pool of staff that includes casual workers and fee and expenses claimants, and different pay elements). This means that our Gender Pay Gap has been calculated differently since 2017, but remains comparable to our data from previous years.

The following data relates to a March 2018 snapshot for publication in 2019.

Women are well-represented at all levels of our grading structure, including our most senior academic, professional and leadership roles, and this is reflected in our Mean Gender Pay Gap of 14.6%, which remains much better than the pay gap in the UK workforce. This pay gap is the difference between the average pay of all men, and the average pay of all women in the organisation. 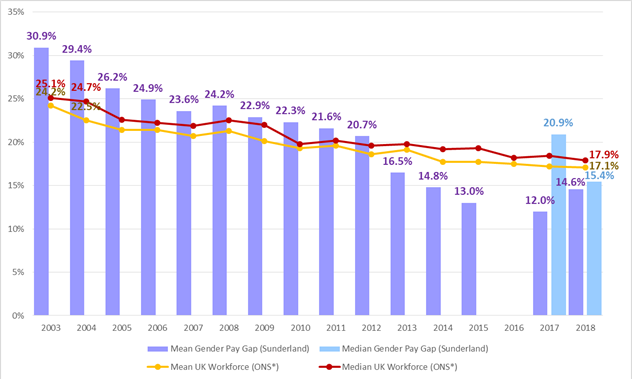 The Median pay gap works by standing all men and all women in two imaginary lines in order of pay and then comparing the rate of pay of the middle man and woman in each line. Our Median Gender Pay Gap of 15.4% reflects the fact that, in addition to the positive representation of women across our pay structure, there are some part-time roles at the lower end of our pay structure which tend to be predominantly filled by women (see Bonuses and Quartiles below; for example we have many Domestic Support Assistants who are mostly women.)

The Government requires organisations to specify the pay gap in any bonus pay (both mean and median). The University paid almost no recognition payments or Long Service Award vouchers in the relevant 12 month period, which included a period of internal reorganisation.


The data for quartiles is shown in the charts below: