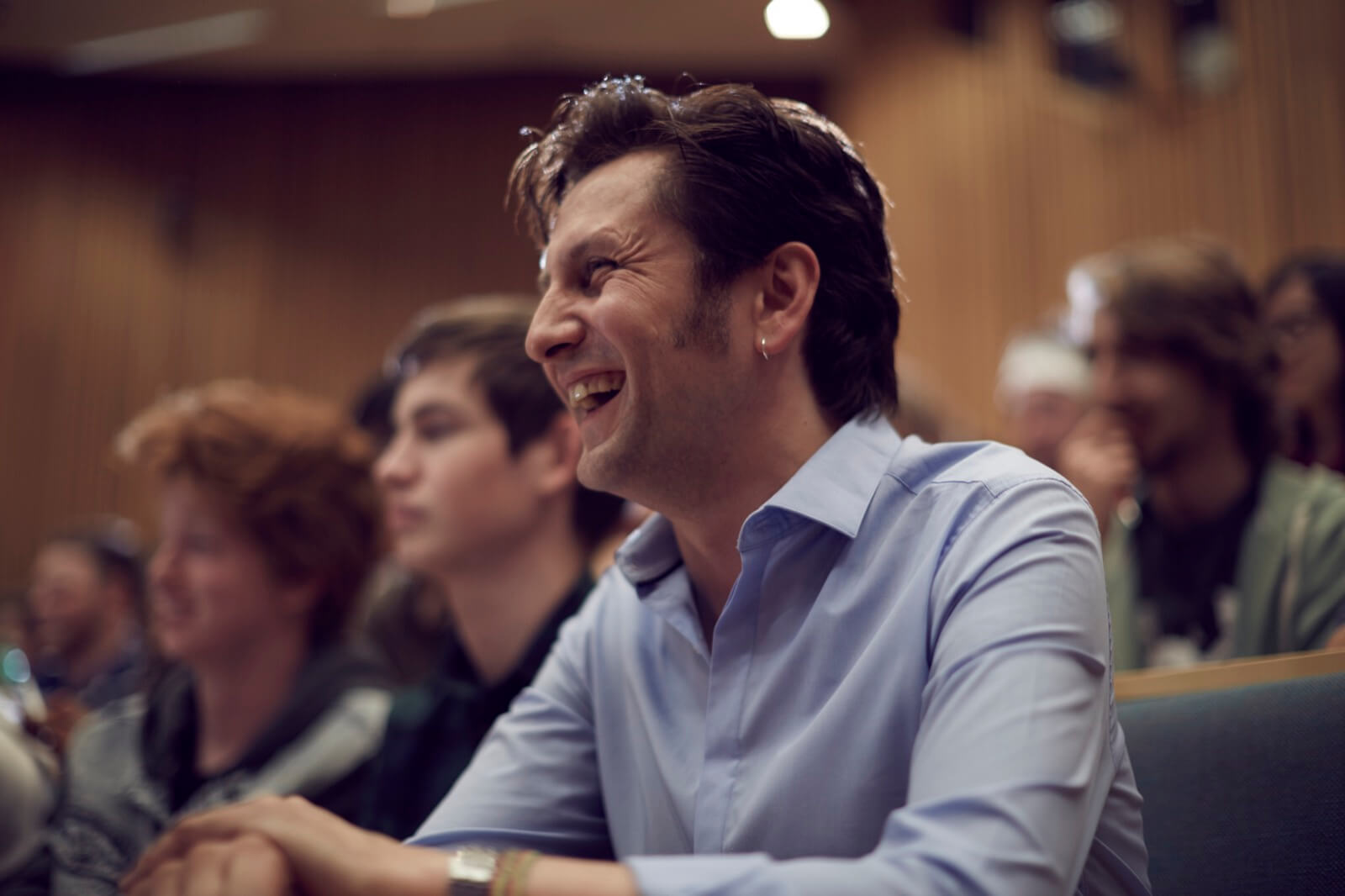 Whilst transdisciplinary approaches between art and science in the active address of health and wellbeing issues are now well established, innovative implementation in practice remains challenging.
This lecture provides an insight into the collaborative approaches adopted by multi-agency settings across the City of Sunderland in supporting military veteran wellbeing through the transectionality of art and science. The University’s vested commitment to civic impact have ensured that these relationships continue to flourish and that using creativity and imagination as instruments of wellbeing support numerous facets of veteran lives. In particular, the project focuses on the facilitation of personal resilience, improvement in quality of life and the nurturing of communities, for whom the impact of military service has left longstanding and changed processes of understanding and making meaning of lives lived.

'Robust measures of professionalism in healthcare professionals and trainees continue to be elusive.  This may be attributed to the complex nature of professionalism.  It is known from the wider literature on work psychology that conscientiousness is the single strongest predictor of work place performance, and research confirms that this is true in health care also. Myself and colleagues have previously developed a proxy measure of professionalism, which is an objective, scalar measure of conscientiousness; the Conscientiousness Index (CI). The relationship between medical students CI scores early in undergraduate education and subsequent performance measures in knowledge, skills and professional behaviours will be presented. In addition, preliminary analysis of data held in the UK Medical Education database (UKMED) suggests that the CI has predictive validity for future performance as a practising doctor.'

Dr Ken McGarry explored some of his past and recent work with plans for future collaborations.

'10 Rules for energy efficiency in the manufacturing sector'

Dr Hamid Ahmad Mehrabi's work is based on his previous and on-going research for product and process improvement by materials and energy saving in the manufacturing sector towards sustainability.

Lothar Goetz, Associate Professor in the Faculty of Arts and Creative Industries

Lothar Goetz is renowned for work that uses the language of abstraction to remake, play with and shift viewers’ readings of architecture and space.

His work ranges in scale from whole buildings – transforming complete façades through compositions of geometric colour – to room-sized wall-paintings to paintings on canvas and A4 drawings. Recurring references in his work relate to ideas of architectural space come from the colour theories of the Bauhaus as well as memories from Goetz’s own childhood of Baroque churches and 1970s modernist bungalows in Southern Germany where he grew up.

The work, composed of highly-coloured geometric forms and shapes, plays with our reading of buildings, galleries and rooms – riffing off each space’s architectural idiosyncracies and playing with our perception of space.

During this lecture Lothar Goetz gave an inside into his practice based research with a focus on site-specific projects, many of them wall paintings, which deal with our perception of colour, space and light and the interactions between them.

“A man should be permitted to go out of this world whenever he thinks fit.” Suicide and Euthanasia in the USA in the 1890s

This talk will compare attitudes to suicide and euthanasia in the United States in the 1890s with those of today. After prominent agnostic Robert G. Ingersoll’s “Is Suicide a Sin?” was published in 1894, the morality of suicide briefly became a popular topic in newspapers. Though the explosion of sociological curiosity about suicide at the time is well known, as is an increasing tendency to understand suicide in medical terms, less is known about more popular interest in the moral aspects of suicide. Whereas Ingersoll’s attitude towards suicide expressed an individualistic, Social Dawininian ethos, a newer, more collectivist approach that would later find expression in Progressivism changed attitudes towards self-destruction. Histories of euthanasia and assisted suicide point to this period as being a rehearsal of today’s discussion, but this article shows the difference between Ingersoll's attitude to suicide, which was compatible with moral equality, and the idea of euthanasia and assisted suicide, which attaches differential value to human lives, as the talk will shows, there was no mention of any need for assistance with suicide and virtually no crossover between advocating tolerance of suicide and advocating euthanasia, which became more popular a decade later.

Stephanie Wilkie is an environmental psychologist with expertise in the impact of built and natural environments on wellbeing. She regularly works in collaboration with researchers in psychology, public health, and urban design.

After obtaining her PhD in 2001 from Indiana University (USA), she worked in a research and development non-profit organisation on large-scale survey research programmes.  She joined the University of Sunderland School of Psychology in 2004.  Stephanie’s Associate Professorial Lecture will focus on theoretical insights from Environmental Psychology relevant to understanding the link between persons, place, and their health and wellbeing, as well as how the integration of environmental influences is important to broader national and international policy targets to improve population health

‘Participation and Radio’ - new approaches to participation, action and research

Caroline talked about the development of the C-MAP (Cultural Mapping, Arts and Participation) approach to research. She explored how two different research projects ('Transnational Radio Encounters', 2013-2016 and 'Putting Southwick on the Map', 2016-18) have had impact in their respective communities.
Caroline demonstrated the geo-located radio map 'Radio.Garden' and talked about the recent follow-on work she has been doing with schools and the BBC.

The focus of this presentation centres upon the experiences of supervising practitioner-researchers engaged in the first year of a Customised Master of Philosophy (MPhil) programme of study. This pathway resides within a larger collaboration between the University of Sunderland’s Centre for Excellence in Teacher Training (SUNCETT) and the Education and Training Foundation (ETF) delivering a National Practitioner Research Programme (PRP) in England. It takes as its starting point how non-traditional research students from the further, adult and vocational education (FAVE) sector experience entry into the programme and their subsequent development of scholarship and research skills as they pursue study at research degree level in higher education (HE). Using six guiding principles underpinning the PRP as a framework for analysis, illustrative stories of the experiences of supervisors and research students provide insights into ways in which supervision is enacted. Some key characteristics of supervision practice are described. These often bring to light differences between supervision on the Customised MPhil with that of conventional MPhil programmes. The most striking finding supports how the development of collaborative and cooperative practice helps to shift the customary dynamic of research degree study away from isolation towards a shared experience as members of an inclusive and active research community.

In October 1936, a year after the San Francisco Museum of Art (SFMA) opened its doors to the public, its first Director, Dr. Grace McCann Morley, would contact Roy Stryker, Chief of the Historical Section of the Resettlement Administration, Washington D.C., stating that her museum was eager to stage an exhibition of Miss Dorothea Lange’s photographs, the negatives of which, produced only a few months earlier, were kept at the RA archives. At the time, SFMA was the only museum on the West Coast dedicated to modern art and one of the first American museums to recognise photography as art, with acquisitions of works by contemporary Bay Area photographers and a range of photography exhibitions since 1935.

A great believer in the social value of contemporary art and a fervent advocate of cultural democracy, Morley was clear on the role that photography could play in a museum of modern art that fostered public outreach and participatory learning. Correspondence with photographer Ansel Adams reveals that Morley was sceptical about concentrating on ‘pure’ art photography, the kind that Adams was concurrently promoting at the newly established Department of Photography of the Museum of Modern Art in New York as Vice-Chairman of the Photography Board. Morley argued that it was indeed important to raise the standards of photography but did not want to exclude vernacular or popular photography from the museum.

During her twenty-four-year career at SFMA, Morley’s progressive vision, widening participation strategies, and educational mission were instrumental in incorporating ‘the edge of the creative art of our time’, new media such as Photography, Film, and Television, popular culture, diversity, and experiential learning in the art museum. Yet, despite her successes, Morley faced very many challenges, financial, ideological, and personal, no less due to sex discrimination, resulting, in 1958, in her resignation.

This paper endeavours to recognise Morley’s contribution to the institutionalisation of photography in the art museum, which was, like women’s photographic work at the time, largely marginalised in what was for decades a male-dominated field.

Noel Carter is a molecular biologist who has been involved in research in several fields from bacterial genome sequencing to human transplantation. He regularly collaborates with researchers in Health Sciences and Wellbeing as well as having a long-standing collaboration with Clinical staff at the Freeman Hospital.

Noel obtained his PhD in bacterial genomics in 1996 at Newcastle University where he then worked on bacterial functional genomics before moving to the Department of Surgery to work on mammalian inflammation. Here he began to work on the role of glycosaminoglycans in facilitating cytokine and chemokine functionality. Noel joined the University of Sunderland in December 2001 where he continued to work on inflammation in a transplantation setting and formed a collaboration with Prof. David Talbot at the Freeman hospital. The research with Prof. Talbot focussed on expanding the donor pool for transplantation.
More recently Noel has returned to his roots and been involved in more cell biology projects.

This lecture will focus on the work of two of his recently successful PhD students works. The first was a project to understand the molecular function of the protein AMBRA1 using a range of omics methodologies. The second was investigating the role of key amino acids in the chemokine CCL5 and how they facilitate interaction with the glycosaminoglycan heparan sulphate and what that means biologically.

As researchers, we come under increasing pressure to produce ‘paradigm shifting’ work, to produce work that makes a difference, work that matters.  Some of this pressure is external, related to the requirements of the REF or the criteria for promotion, and some of it is no doubt internal, related to our own aspirations, goals and values in research.  But what do we really mean by paradigm-shifting work and the need to produce it?  In this address, I use some of my own work in progress, an evaluation of what I call the language-shaped hole in educational research, as a worked example to explore this issue.  Concentrating on this work and my research journey towards it, I call, perhaps unusually in this context, on insights from ancient wisdom traditions and practices, such as Stoicism and mindfulness, to illuminate this very here-and-now issue.  Ultimately, I argue that our institutional conversation on paradigm-shifting research needs to be informed by a set of different and nearly forgotten ways of knowing if we are to talk purposefully about what producing such work really means.