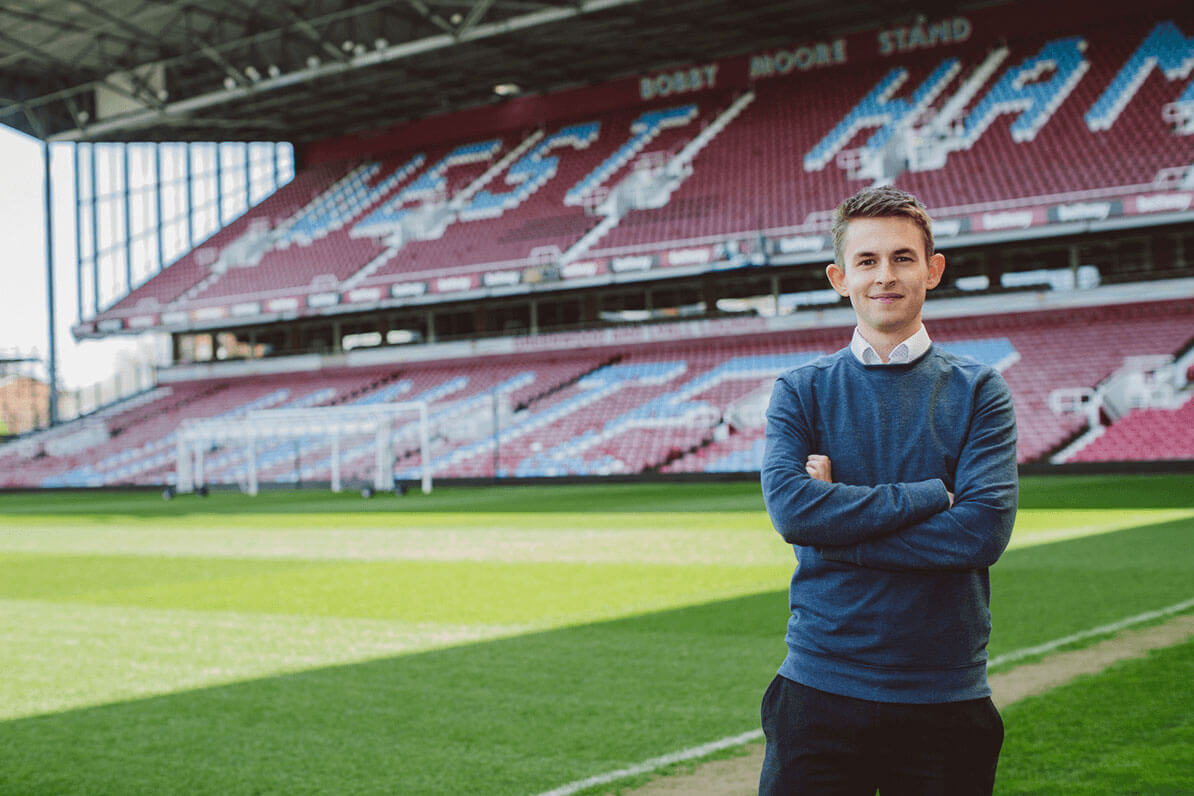 Sports Journalism student Matt Riggs scored a full-time job with West Ham United before he even graduated from the University of Sunderland.

Matt beat hundreds of other applicants to land the 12-month editorial internship at the Premier League club, writing for the Hammers’ various publications and producing content for their multi-media platforms, from match day programmes to Snapchat.

It was the 21-year-old’s versatility and experience which landed him the role, having spent the last two years of his degree juggling his studies alongside his voluntary role as Blyth Spartans' Senior Press Officer, SpartansTV Producer, Radio Northumberland co-commentator and Matchday Magazine Editor.

That knowledge and confidence he has gained while studying at Sunderland has certainly been put to good use. Within the first three days of the new job Matt was asked to interview celebrated West Ham players both past and present, including Teddy Sheringham, Trevor Sinclair and Dean Ashton, as part of Captain Mark Noble’s Testimonial game.

Matt, from Hertfordshire, said: “Working with West Ham’s media team is an amazing opportunity and I was certainly thrown in at the deep end in my first week. It was a surreal moment, but also very cool getting a phone call from Teddy Sheringham!

“I could be asked to do anything from writing simple stories for the website to filming and producing video content at first team matches. Thankfully all the extra work I put in at Sunderland, working on the University’s SportsByte website and with Blyth Spartans’ media team gave me so much confidence.

“The club was moving to the Olympic Stadium so it was an exciting time for me to join. Hopefully I’ll make an impact and become a permanent member of staff, and I’m sure they won’t hold it against me that I’m a Charlton Athletic fan!”

Matt, a keen tennis and football player himself, does admit, however, that he’ll miss working with the Blyth Spartans.

Matt said: “I loved every minute of my time at Spartans and I’ll continue to enjoy the role of Programme Editor until the end of the season. I came to the club aiming to make a real difference to the already brilliant media output and I feel like I have done so, particularly to the Matchday Magazine itself. Though I’ll be busy, I’ll do my best to get to at least one more Spartans game before the end of the season and here’s to hoping that it will be to celebrate something!”

Spartans’ Media Manager Phil Castiaux said: “It’s a fantastic opportunity for Matt and we’re all really pleased for him; although we’ll miss his expertise, enthusiasm, dedication and good humour.

“Since joining Blyth two years ago Matt has consistently produced quality work on the media side. The Matchday Magazine has achieved new heights with him as Editor. His devotion to developing it has meant him spending a good eight hours on every edition! Plus those of you who have seen his work on SpartansTV and in terms of the massive task of pulling together the FA Cup run DVD will agree that he has done a terrific job on all fronts. And all on an entirely voluntary basis. He’s helped move Blyth Spartans forward and we’re very grateful.”

Phil added: “We have a long standing relationship with the University of Sunderland and regularly have sports journalism students working with our media team. It’s a relationship we’re delighted to continue.”

Lecturers at Sunderland also supported Matt, as he completed his final year dissertation whilst working full-time.
Dr John Price, Senior Lecturer in Journalism, said: “Matt has been an outstanding student who has done all the right things to give him the best chance of a successful career in the sports media.

“He will leave us with a high-quality degree, a range of journalism skills, a fantastic portfolio of published work and an impressive network of contacts developed from his placements and freelance work.

“On top of all that, Matt is a pleasure to work with and displays great enthusiasm and determination. His success will hopefully provide inspiration for future students.”

Asked why he chose to study at Sunderland, Matt said: “I’ve wanted to write about sports, in particular football, for as long as I can remember, and initially looked to studying a sports journalism course at university close to where I lived. However, after attending an Open Day at Sunderland, I just knew this was the place for me. I loved the facilities and the course was NCTJ accredited, which was important.

“I certainly made the most of the degree and any work-related opportunities on offer. Without these external experiences such as working for SportsByte and Blyth Spartans, I would not be in the position I am today. You need to make sure you’re as employable as possible, it isn’t enough just to turn up to class; our lecturers highlighted how important this was from day one.”

He added: “The course was great as you’re given experience in all sorts of areas of journalism, which allows you to keep your options open once you graduate in this industry. I’m really proud at what I have achieved so far, and can’t thank Sunderland enough for getting me off to a great start.”

Getting into journalism can be challenging, but here at the University of Sunderland, we give you all the tools you need to make it as a great journalist. Here are just a few of the ways we equip you to make it in the industry.

Alastair Stewart: What it takes to become a journalist

Journalism may have been regarded as a soft option a few years ago. This is no longer the case, according to award-winning Journalist and Broadcaster Alastair Stewart OBE. A revered media presence, here he shares his expert insight into the changing face of journalism and offers advice to aspiring journalists.

Carole Watson: An insight into Journalism at Sunderland

With a journalism career spanning 25 years, Carole Watson is now Programme Leader in Fashion Journalism at the University of Sunderland. Here, she shares an insight into her distinguished career and talks about the opportunities Sunderland has to offer aspiring journalists.

Kevin Maguire: How to succeed in the journalism industry