Sunderland has a thriving creative writing community that draws expertise and passion from a diverse group of people, including many of our students and staff. We spoke to some of the key players who have re-kindled their love of literature and writing, and even published a book or two.

Stephen Thompson, from the University's External Relations department, got involved in the writing scene through the annual Sunderland Short Story competition. The competition is a collaboration between the University and a small independent publisher, Bandit Fiction, and is run by University of Sunderland graduates.

“I didn't study English at University or know many writers to begin with. Through the competition I learned of the Holmeside Writers group which runs twice a month in the city. As the group is open to the public, a great effort is made to ensure it's a welcoming, inclusive and encouraging environment where you have the chance to discuss your writing. The group is open to writers of all levels from beginners, like me, to established full-time writers. Thanks to the group I've had the opportunity to meet and discuss writing with screenwriters, poets, playwrights, and film and radio producers that I probably wouldn't have encountered outside the group." 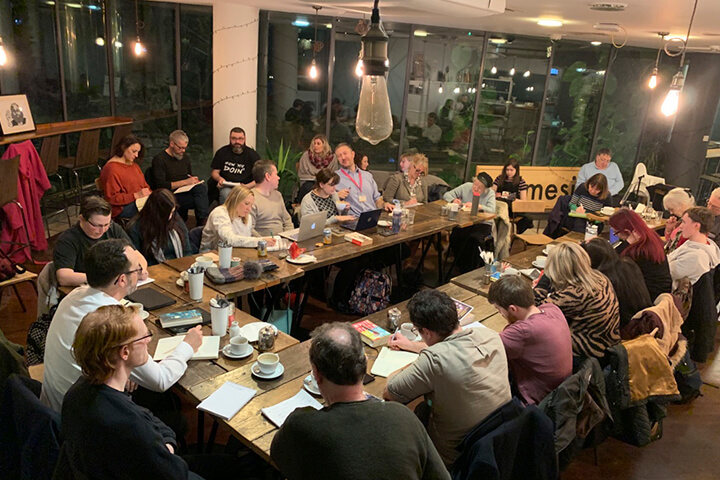 "By engaging with the meetings and the sharing process, I believe that everyone who attends leaves each session a better writer – whatever they're writing. Outside of Holmeside Writers, the writing scene in Sunderland seems to get bigger every year. Although we're a small city, the recent City of Culture bid has given a boost to events such as the bi-annual Creative Writing and Literature festival and the Sunderland Stages Writers Project.”

Iain Rowan, the man behind Holmeside Writers, told us how it all started through a happy accident and has grown to include the annual Sunderland Creative Writing Festival.

“Holmeside Coffee had just opened up and its owner Joe Collins was keen for it to be a cultural hub, not just a café. He’d already set up a film club and a book group, and when my wife was in for a coffee he mentioned that he would quite like a writers’ group."

"She volunteered me and that’s where it all started. On our opening night, I hoped that I might get three or four people through the door – eleven people turned up, many of whom are still regulars six years on. It’s grown to a regular membership of 15-25 coming to meetings, from experienced published writers to those who have never shared their writing with anyone before, and it’s one of the most rewarding things I’ve ever done. Seeing people move from the first steps to getting published – having plays staged or short films made of their work – is as satisfying as anything that’s happened with my own writing. There have been collaborations with the Northern Gallery for Contemporary Art, the University’s own Forward Press, the BBC and Sunderland Culture."

"The success of the group led to me developing the Sunderland Creative Writing Festival, which has run twice so far – the last attracting over 500 people from across the whole north-east region. Sunderland’s long had a vibrant, supportive music community. What we’ve tried to do, working with others like Sunderland Culture, is develop the same community and culture for creative writers.”

Finally, we caught up with David Turton, author and Marketing Campaigns Manager at the University.

“I’ve always been an avid reader and, as a journalism graduate and marketing professional, I’ve spent my career working with words. So in early 2017 I decided to take up writing fiction. At first I didn’t tell anyone, thinking it was a little eccentric, especially as I was writing horror and science fiction. I thought being an author was a solitary pursuit, just for people locked away with their own imaginations. But then a contact at the University introduced me to Holmeside Writers and it opened up a new world for me. I discovered that Sunderland has an incredible writing scene. I’ve met colleagues and students who are in various stages of publication. I was lucky to have my debut novel published in December 2018 and I’m currently working on my third. I’ve had over 30 short stories published and was shortlisted for the Sunderland Short Story Award." 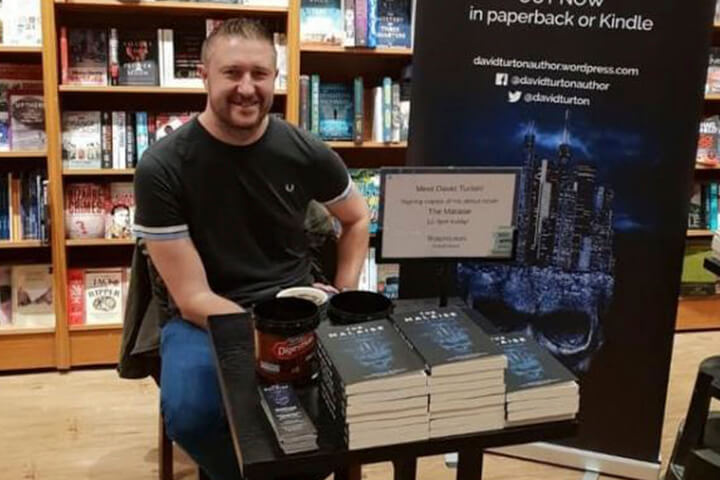 David Turton, published author and Marketing Campaigns Manager at the University of Sunderland

"Creative writing has opened up so much for me – networks, friends, confidence and creativity. I’ve had the most amazing support from people like Sarah Dobbs, a fantastic novelist herself, and Iain Rowan, who leads Holmeside Writers, not to mention all of the students and staff I’ve met through writing. Sunderland is a hive of cultural activity and I’ve never known a place have so many novelists, writers and poets. But my favourite part of the community is just that – it’s a community and ensures writers can bounce ideas off each other, support each other and continue to create bigger and better things.”

"Like many other things in recent times, the celebration of creative writing hasn’t stopped. Holmeside Writers has continued and several members took part in a Talking Heads series for Sunderland Streets Festival 2020. We’re also excited for the upcoming Sunderland Literature festival which will also move online for 2020."

This community will form a backdrop to the University’s new BA (Hons) English: Creative and Professional Writing degree. Programme Leader Sarah Dobbs is a published author and the driving force behind the Sunderland Short Story Award. She looks forward to introducing students to this creative community and nuturing their talents to help them become professional writers.

Graduate Amy McLean has released her third novel – penning her first while she was studying English Literature at the University.

Professor Angela Smith: Why studying English is great for your career

We caught up with Professor Angela Smith, lecturer in English at the University of Sunderland, to find out why English is a great subject to study at degree level.

What can you do with a degree in English?

While the career paths for other degrees are often more narrow, English is a subject that can be applied to a huge number of industries and careers, as well as being a well-proven route into graduate training schemes. Here are just a few things that you can do with a degree in English...