A former Disney World employee turned graphic design student is letting his creative talents shine as part of a University of Sunderland exhibition.

Jason Ortega worked at the Florida holiday resort for 13 years as an entertainment manager, primarily looking after the characters, photographers, technicians, and actors, as well as overseeing dining and firework events.

After being furloughed during the COVID-19 pandemic in 2020, Jason took a leap of faith and took his passion for design to the next level by travelling more than 4,000 miles across the North Atlantic from his home in Tampa, Florida, to Sunderland – to study a Master’s degree in Design.

“Although I miss the warmer weather back home, I absolutely love England,” the 33-year-old said.

“I came to Sunderland because the programme was tailored to whatever path I wanted for myself, and this is huge. They also accepted me onto the course despite having an undergraduate degree in music rather than design.

“This experience has allowed me to step outside my comfort zone and to grow in more ways than one.”

Now, Jason is hoping his latest project – ‘The Plastic Pandemic’ – will educate children about the impact plastic waste is having on our oceans and what can be done to help tackle the problem. 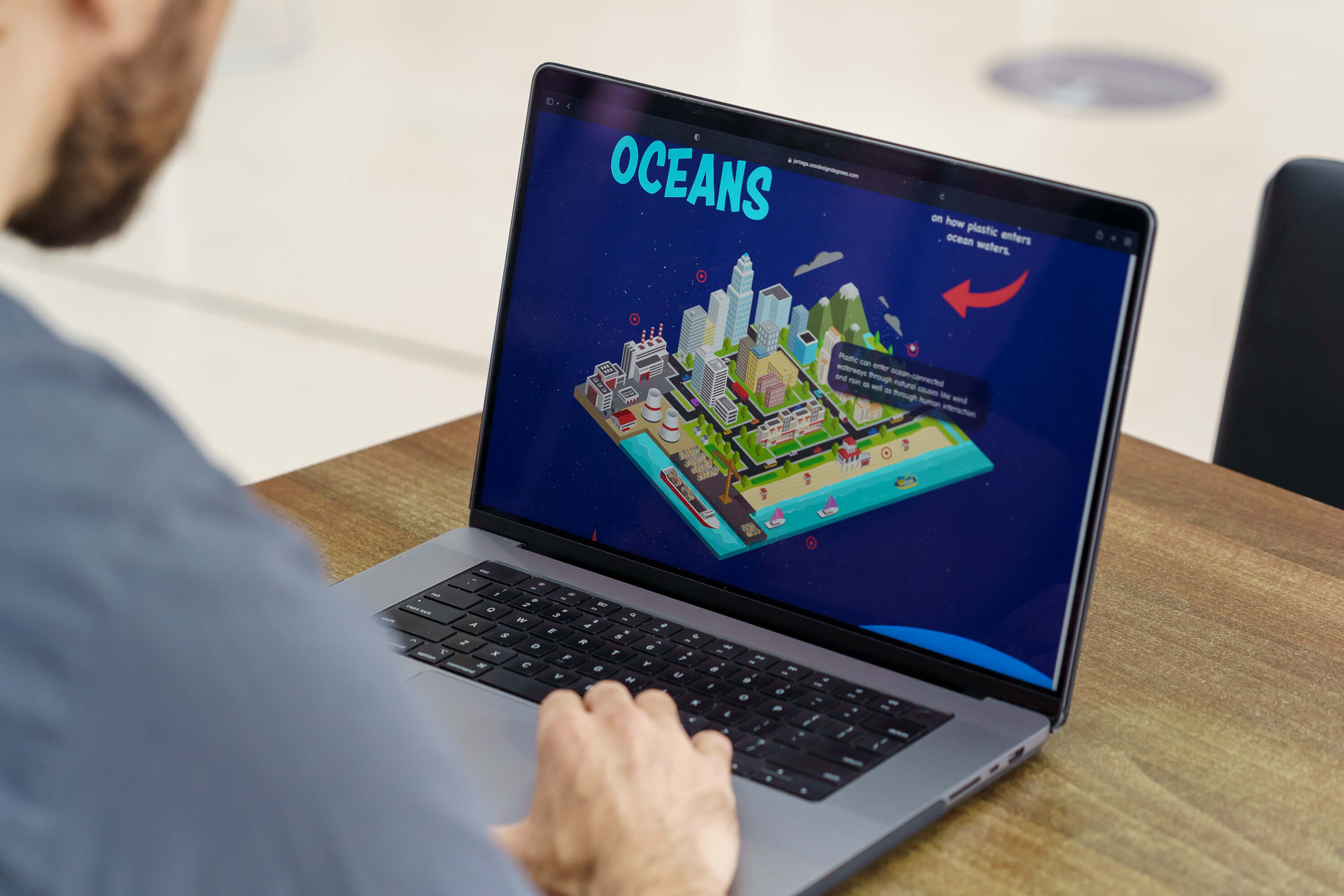 The interactive website will be exhibited as part of the University’s annual MA Art and Design Degree Shows, the first two of which open to the public this Saturday (September 24) at both the Priestman Building on City Campus and National Glass Centre at St Peter’s.

Jason, whose project will be displayed at Priestman from October 18-31, said: “We were challenged with the task of how our designs can make a difference to society, so I started thinking of current hot topic issues and I immediately thought of the environment.

“Because I come from a city right by the ocean and ended up moving to a city located right next to the sea, I can see first-hand the threat plastic poses to the environment and knew this was the direction I wanted to take my project.

“Since children are growing up in a world run by smart devices, I wanted to create an interactive website as I thought that would be the most effective approach to engage with a younger audience.”

Jason added: “It's not meant to come across as "doom and gloom", but rather meant to educate about the environmental issue and how it got to the condition it is currently in, how it is affecting marine life, and how we can be a part of the solution to fight against the build-up in ocean waters.” 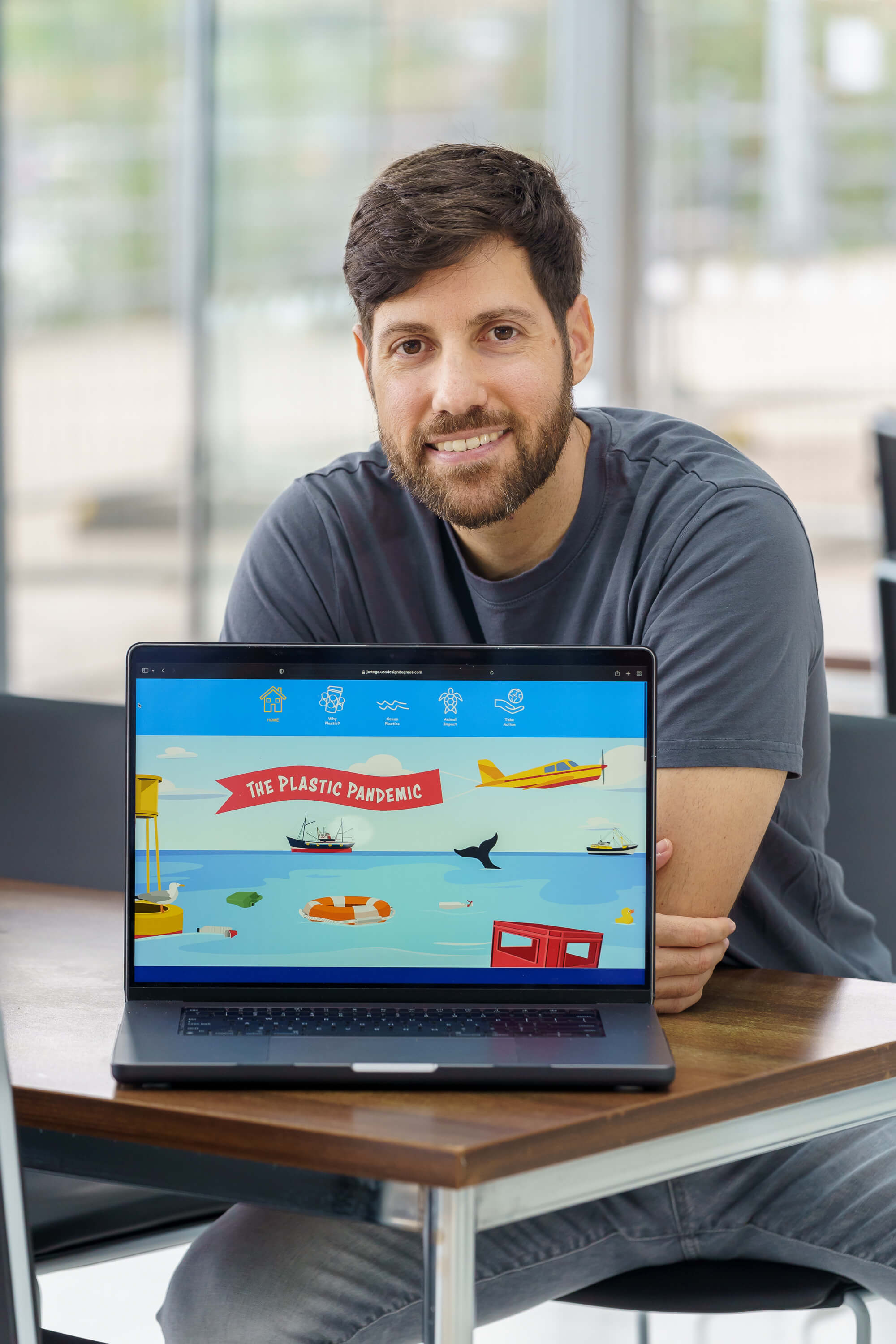 Each year, the University’s School of Art and Design holds degree shows for the graduating class. This is an opportunity for students to exhibit their work publicly, which for many is their first major public exhibition.

Professor Kevin Petrie, Head of the School of Art and Design at the University of Sunderland, said: “It’s been really exciting over the summer to see the work of our MA students emerging in the studios.

“The forthcoming exhibitions are going to be a chance to celebrate and enjoy this creativity and hard work across a range of art and design subjects.”

Here are some of our other talented students having their work exhibited, which can be viewed here.

David’s artwork – ‘Echo Chambers’ – has been inspired by his fascination for the external environment around ancient Japanese buildings, as well as his interest in haiku poetry. 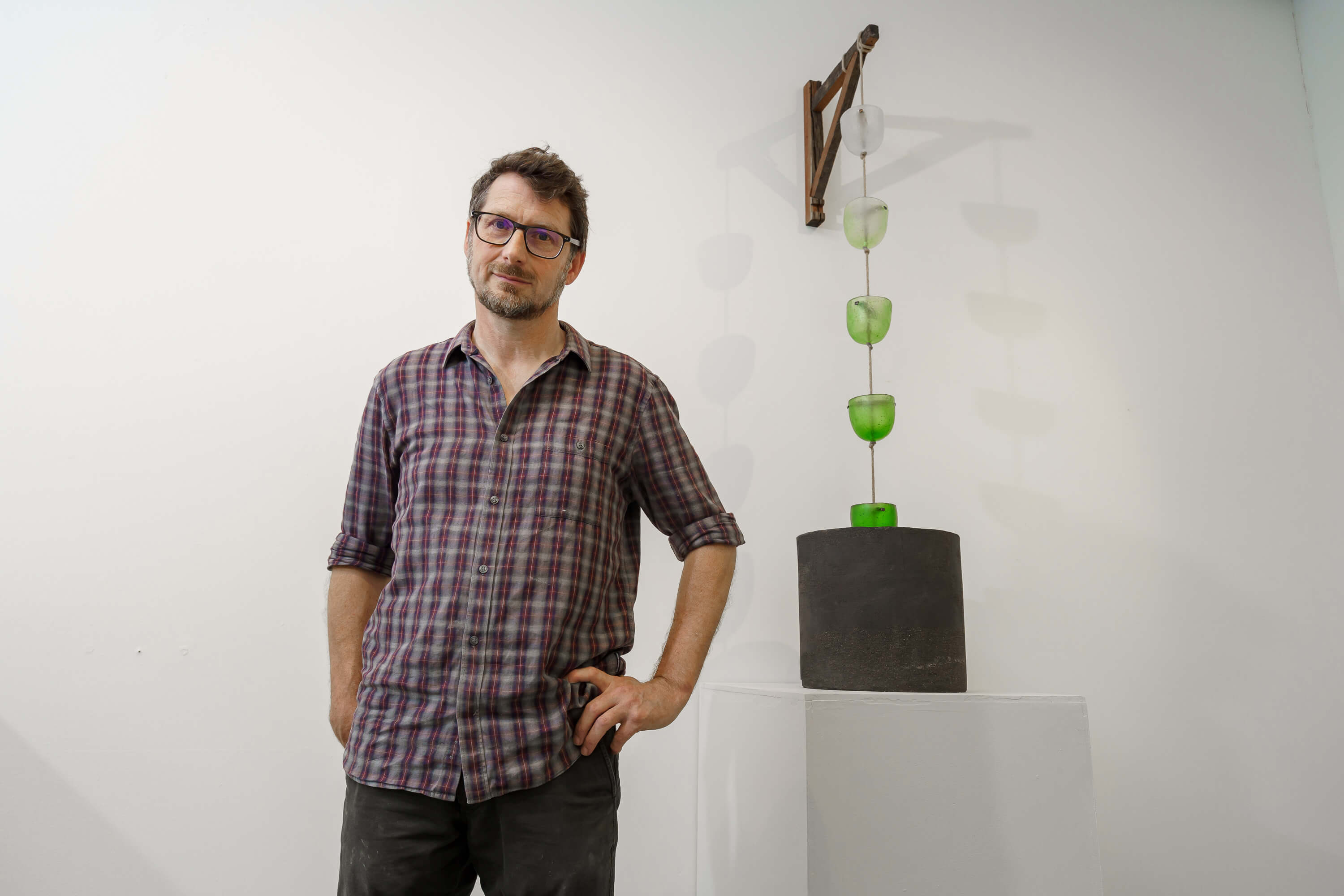 David, from York, whose partner is also Japanese, previously worked as a hospital doctor for 36 years and the skills he picked up during his former career have certainly come in handy.

“The more I’ve studied Glass and Ceramics the more I’ve realised the similarities between this and working as a radiologist,” the 60-year-old said.

“For example, in radiology there are many imaging modalities such as an X-rays, ultrasound, CT or MRI and an important aspect is choosing which technique is best suited to the question you’re trying to answer. To create an artwork out of glass or clay it’s also important to understand how the different techniques work and which to choose for the outcome you’re after.

“Both jobs require planning, concentration, and some manual skill. For example, this isn’t too different when performing a CT biopsy or when creating something out of glass or clay. Also considering the meanings held within visual information is central in both disciplines, however, whereas radiology involves using words to express and interpret visual information, making art is the opposite, in that words and ideas are translated into a primarily visual image or piece of work.” 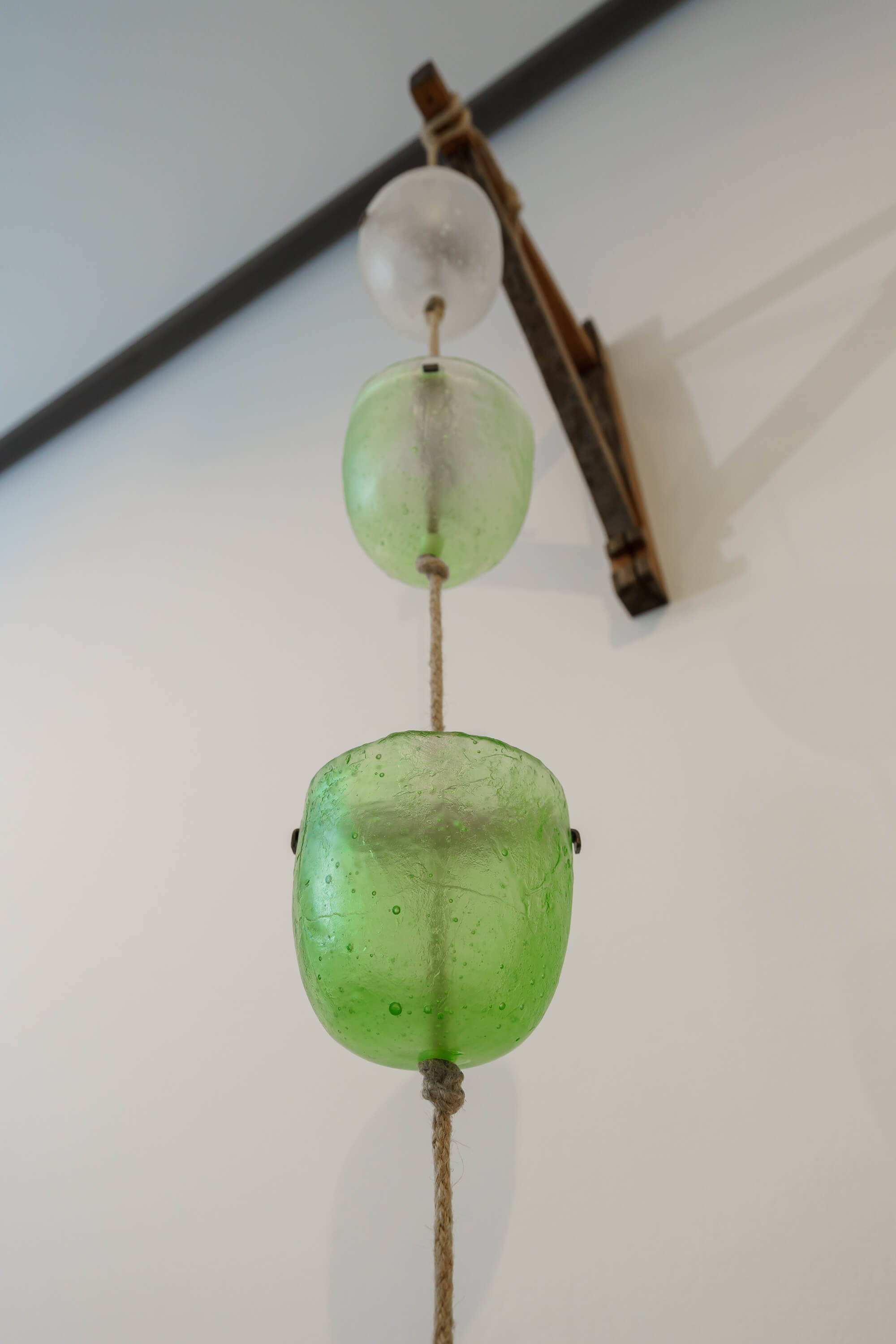 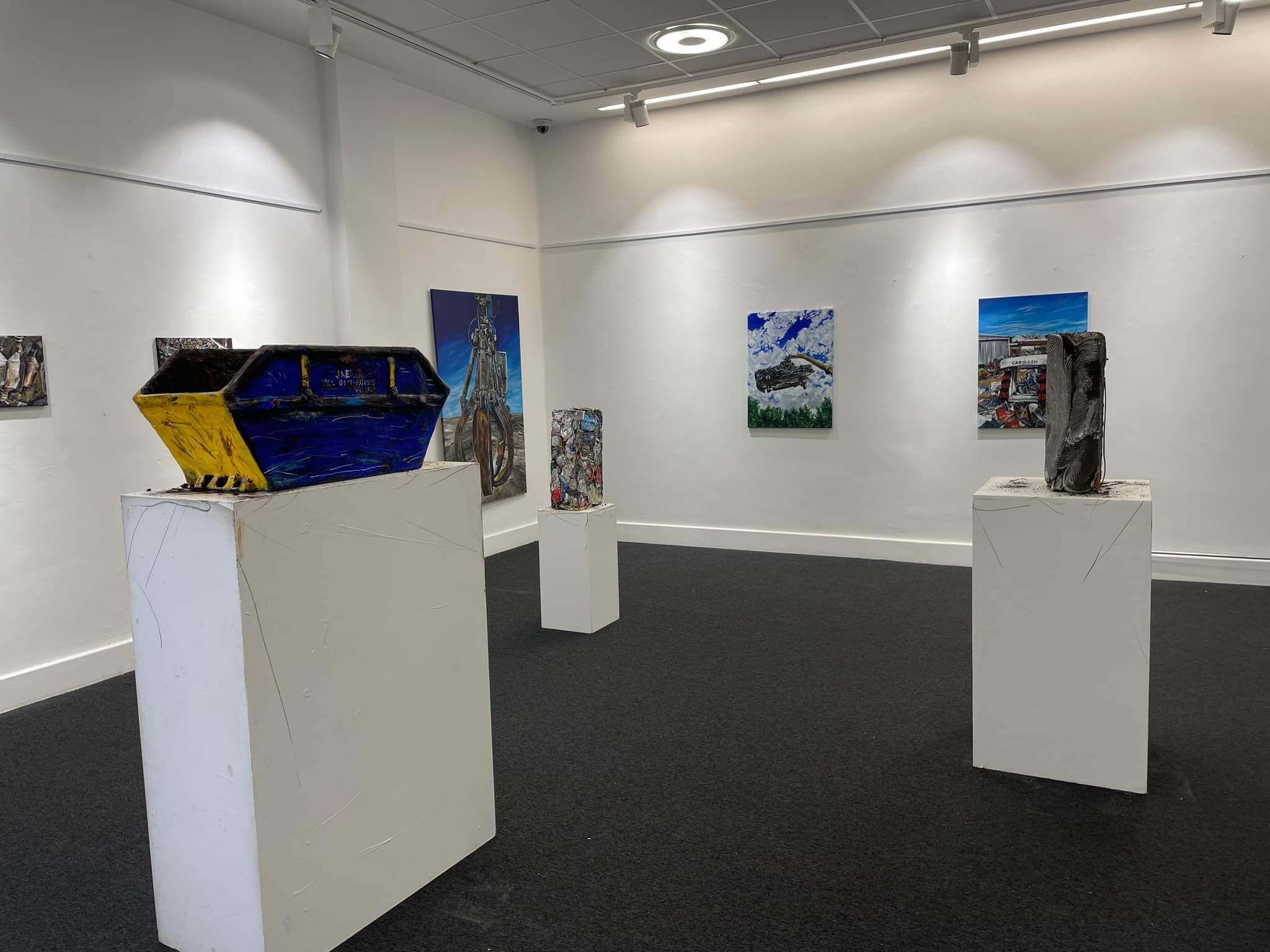 As well as studying an MA, Natasha, 36, also works full time for her family business, metal recycling site John Kerr Metals in Birtley, Gateshead, and she has a three-year-old son named Matthew. 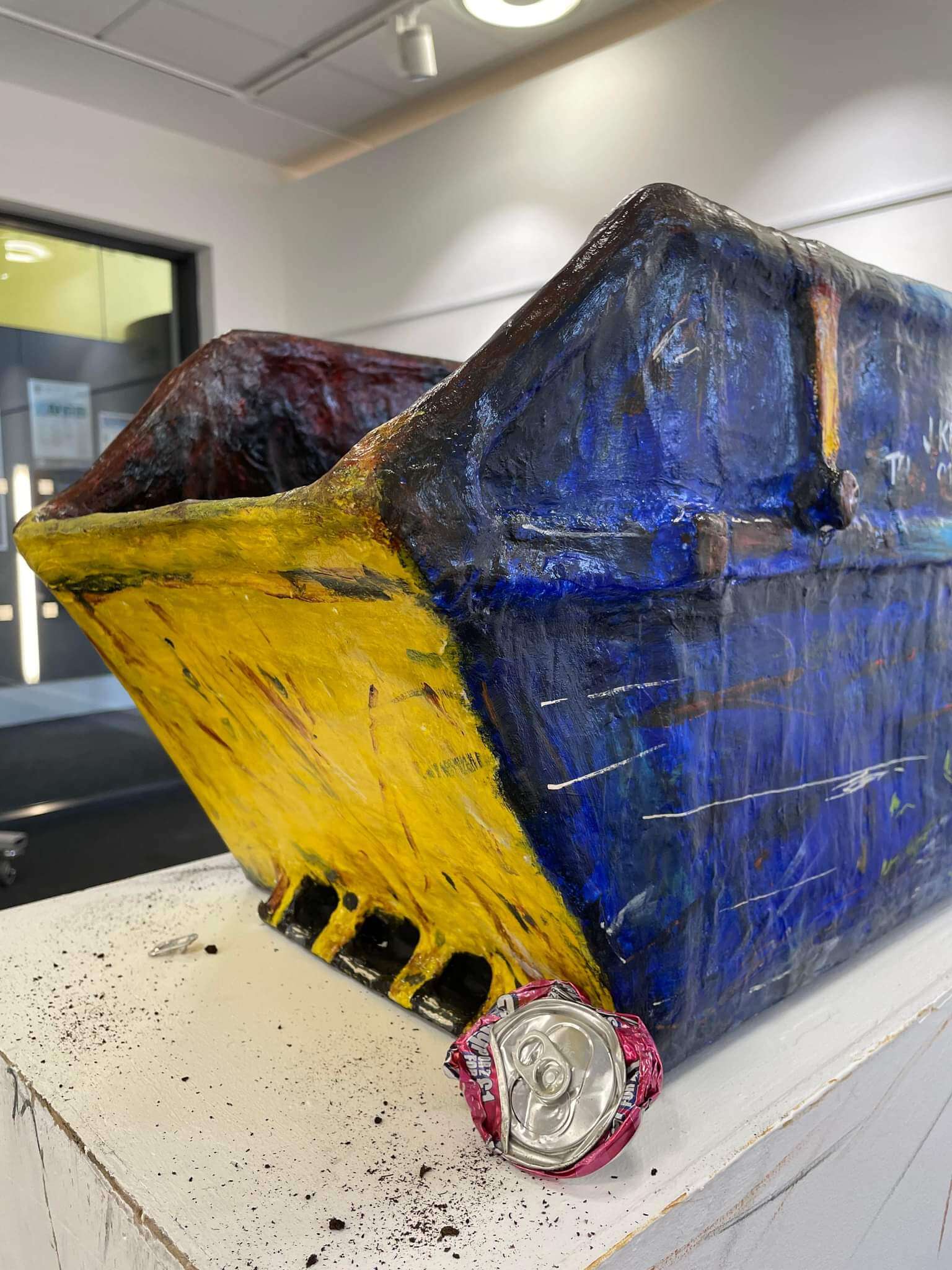 Natasha is a visual artist and not only works from direct observation to capture the essence of her subject, but she also takes multiple photographs and carries out extensive research. One of her paintings ‘Left on the Scrap Heap’ – based on a scrap car at her workplace – was selected by Grayson Perry and exhibited at the Royal Academy of Arts Summer Exhibition 2022. She has also been part of various exhibitions in the north-east and currently has artwork in local independent art galleries across the region.

Hannah, 37, from Sunderland, has used her project to explore participatory design in small communities and empowering individuals by creating a set of design tools to help them use their voice and engage in conversations about their community. 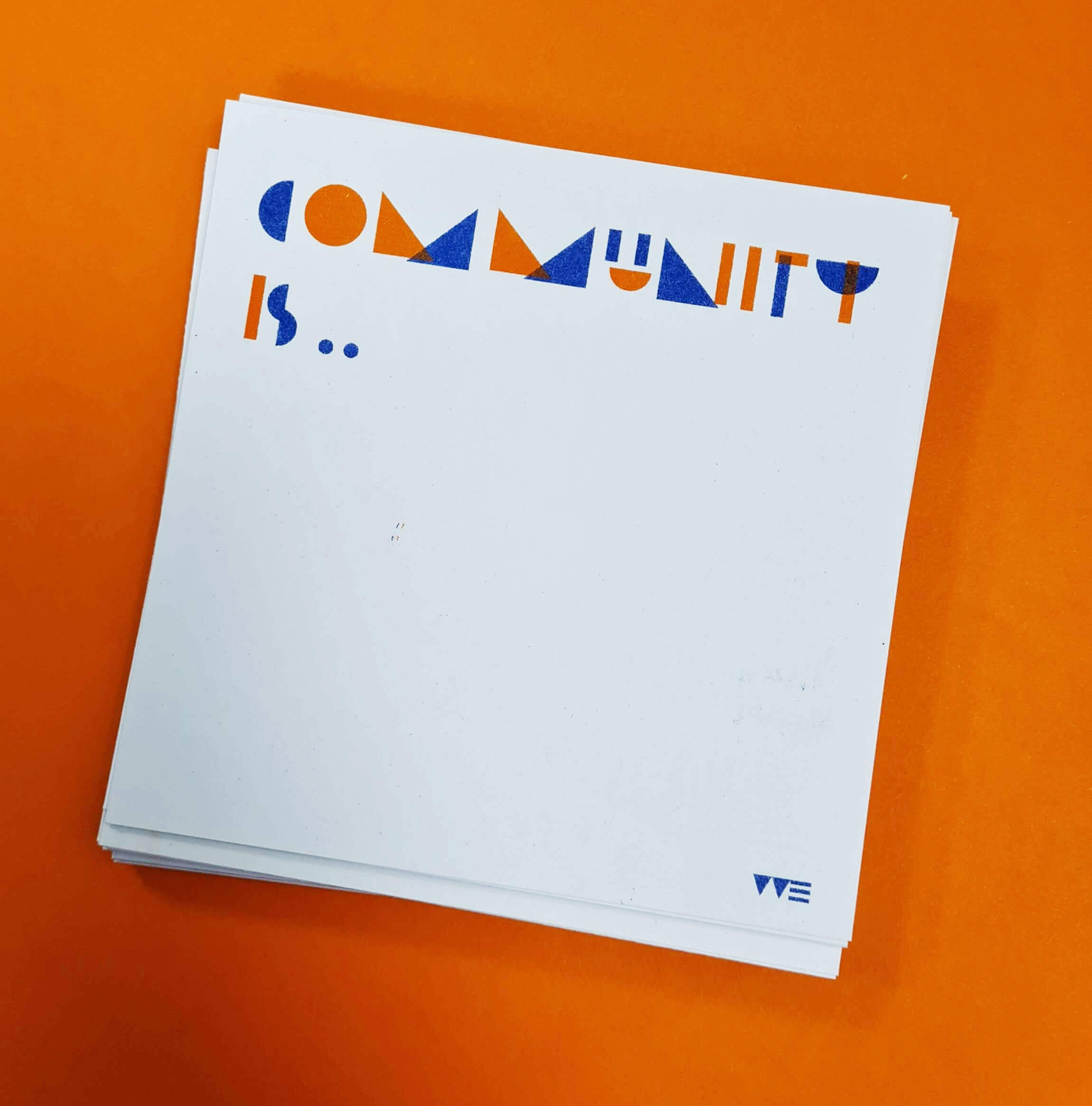 These tools, including workshop packs and conversation starter postcards, have been tested amongst different groups such as a primary school, a local park, and small independent shops. 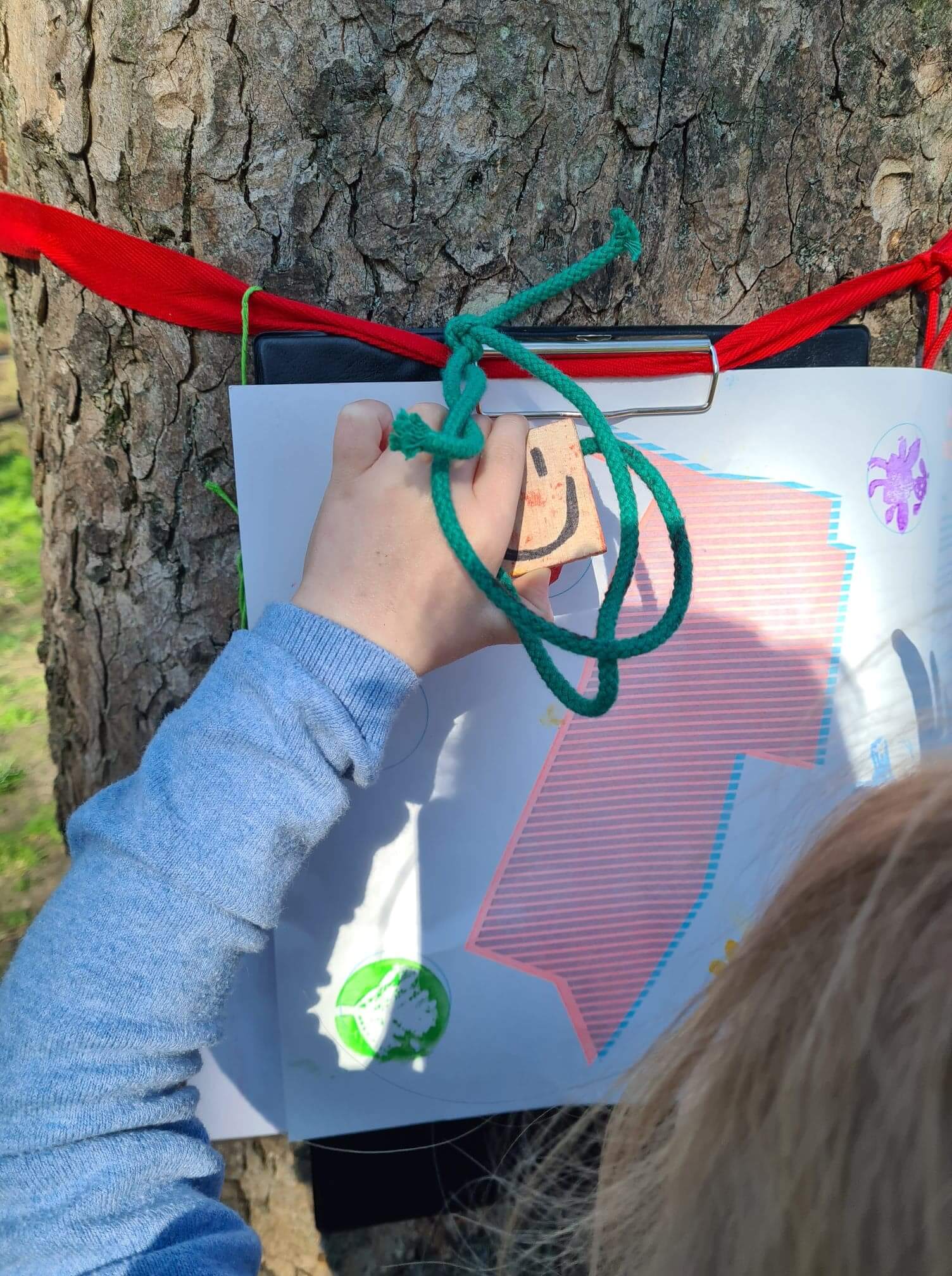 Hassina's main exhibition piece – ‘Hybridity’ – is a series of panels exploring issues of identity and bi-raciality, and her own experiences of straddling different cultures and the challenges of navigating inbetweenness. 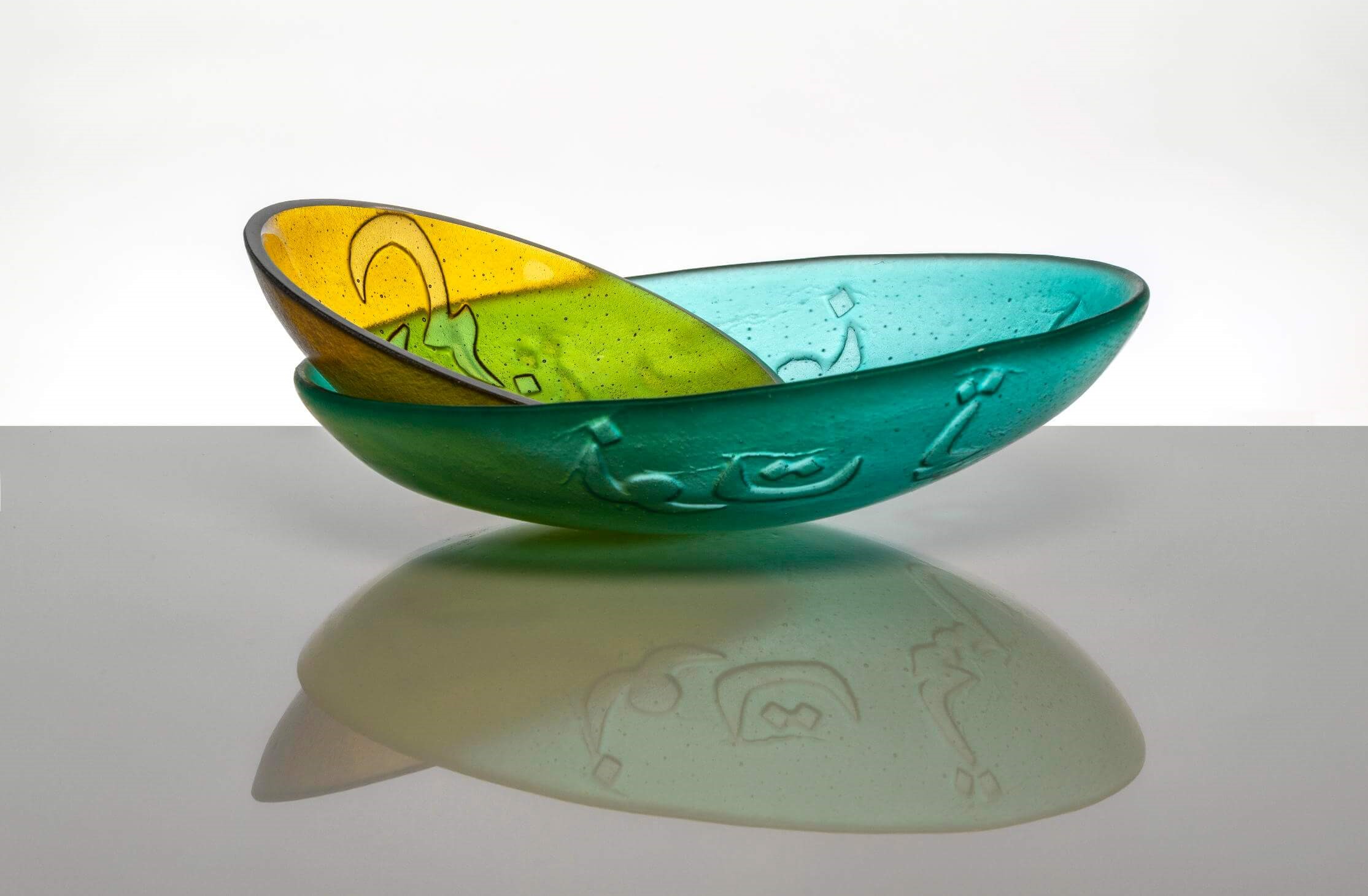 Hassina, from the East of England, was awarded a Mike Davies Innovation Scholarship at the beginning of the year, to learn to write Nastaliq script – the written form of Urdu – which now forms the basis of her work.

The starting points of all of her pieces are words; fragments of text or short poems carefully crafted after working with poet Hannah Jane Walker, embedded within or making up the work. They are written using transliterated text: English words in Urdu characters. This hybrid of languages mimics her background and is intended to confuse the viewer, making them think it is one thing when in reality it is another.

William’s mural – VISMO, 2022 – is inspired by the modernist aesthetic of hard-edge painting, geometric abstraction, and the minimalist movement, with the creative intention to develop the core elements and principles of art and design: line, form, space, colour, and scale. Using these fundamental elements, William aims to explore, interpret, and convey the aspects of modernist architecture and design. 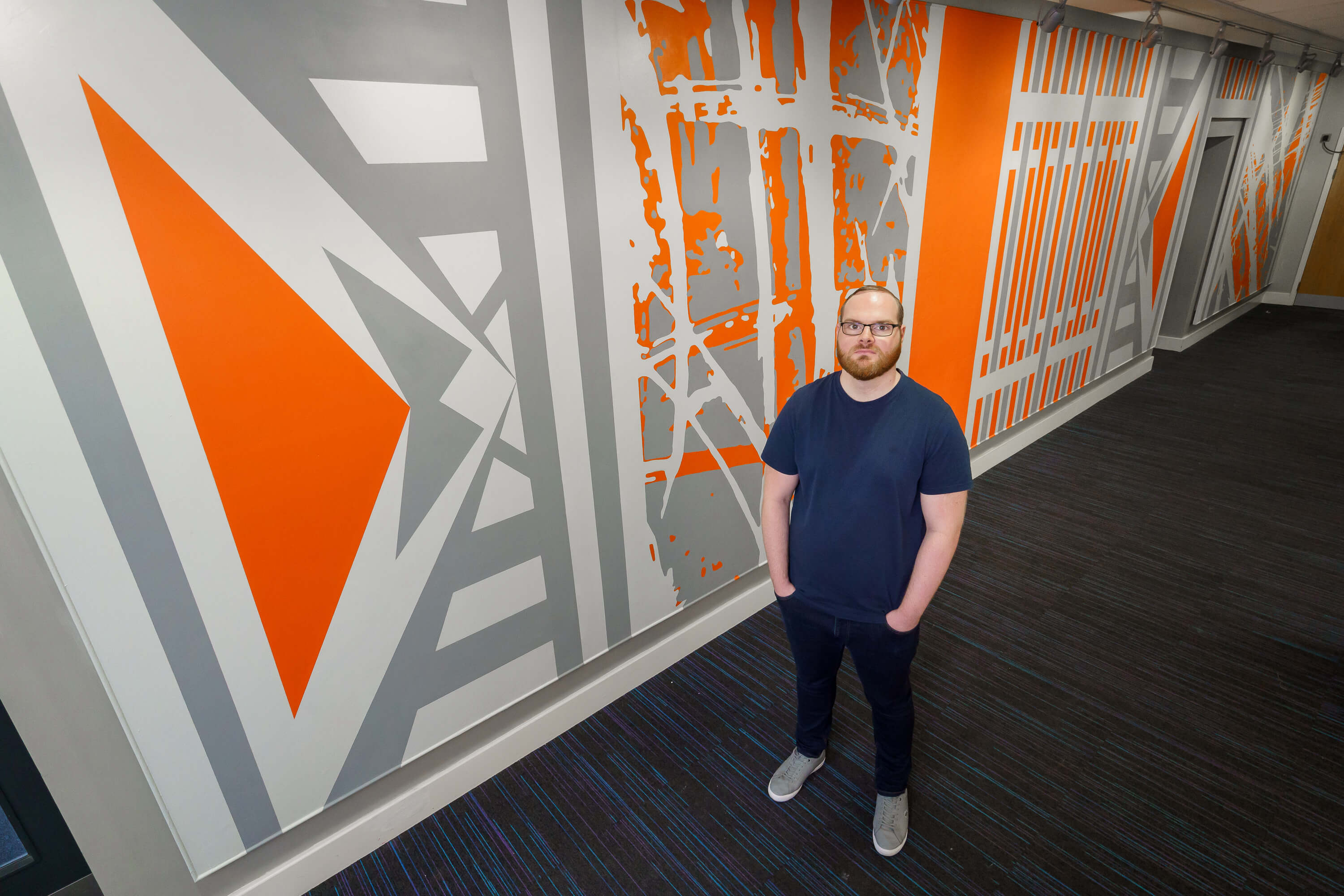 William, 30, from Murton in County Durham, said: “As part of my Master’s degree I have been researching and looking at a range of different modernist architecture examples with the Californian ‘Case Study Houses’ and ‘Eichler Homes’ being of particular interest to me and providing me with the most inspiration throughout the year when developing some new hard-edged, abstract painting designs.

“When preparations began for the upcoming MA Art and Design Degree Shows I was keen to create an artwork that communicated the modernist characteristics, panoramic styling, and the idea of scale present in both these forms of 1940-1960s architecture and that was what then led me to decide upon creating my first large scale mural project.” 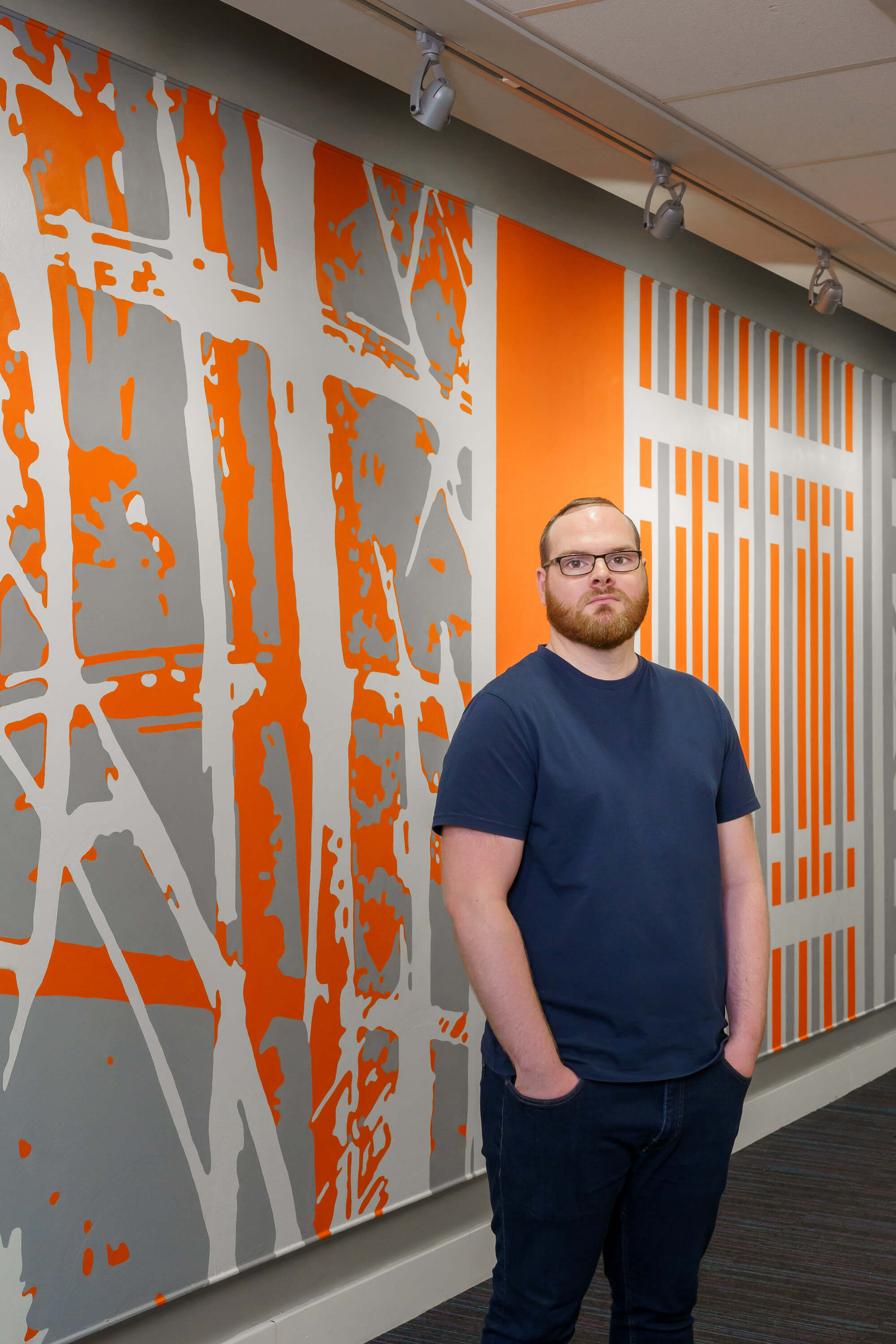 William, who was awarded a Robson Art and Design Master Scholarship, added: “The mural design is visually hard-edged with a minimalist colour palette, and ultimately displays a culmination of clean lines, precise transitions between planes of colour, notable architecture elements, organic elements and a sense of perspective that is reminiscent and interpretive to the architectural forms and environment previously mentioned.”

More information on this year's MA Art and Design Degree Shows, including which courses are showing, dates, times and locations, can be found here.