When the 47 year old Photography, Video and Digital Imaging student began documenting his wife Suzanna’s cancer battle, he did not realise how devastating her diagnosis would be.

His final work – entitled 20 Days – captures Suzanna’s struggle and the final days of her life.

Simon, from Consett, County Durham, said: “It’s been a very difficult process for myself and my family to get to where we are today.

“I was in the second year of my programme when Suzanna, who was 46 at the time, was diagnosed with stomach cancer.

“I started taking photographs of her, never thinking that it would end the way it did. There was just 20 days between her initial diagnosis and her death.

“After Suzanna died, I found a lot of people who just avoid talking to me about her because they thought that was for the best. We’re not very good when it comes to dealing with death.” 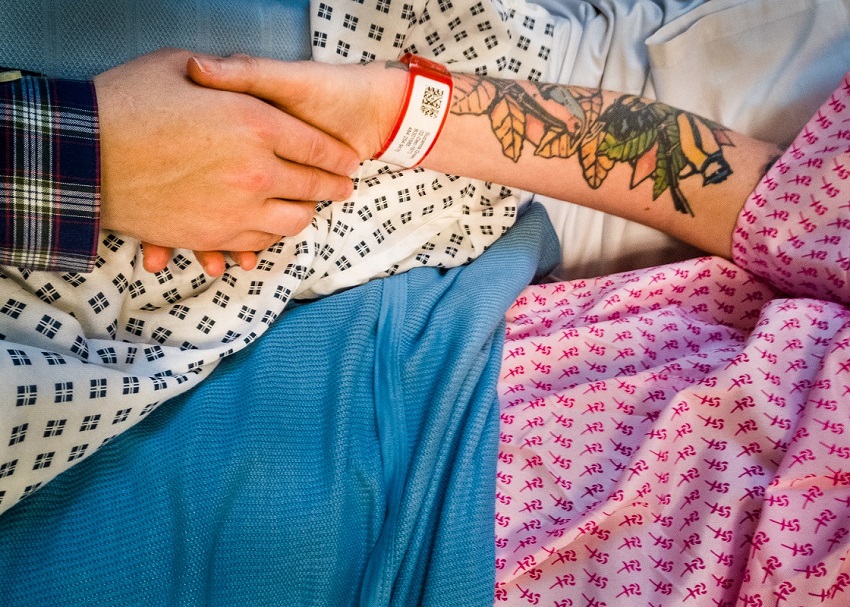 Simon returned to University after spending time as a surveillance photographer in the Army. As part of his time in the Forces, he had taken a tour of Bosnia in 1996 and Northern Ireland, between 1996 and 2002.

Having left the Army in 2002, he was diagnosed with PTSD; isolating himself away from people and suffering a huge breakdown in confidence.

Applying to the University of Sunderland was a way of helping the dad-of-two wipe the slate clean and begin again.

But less than two years into the programme, Suzanna’s tragic death had a huge impact on himself, his 25 year old son and his 20 year old daughter.

Now, as he prepares to graduate, Simon is seeing light at the end of the tunnel.

He said: “The University has been incredibly supportive and the help I’ve received – from Wellbeing to Student Services to Financial Services – has been phenomenal.

“I feel stronger than I have done in a while and ready to move on.”

The 22 year old, from Rowlands Gill, Gateshead, noticed there was a gap in the market for up-to-date fashion wear for football fans. 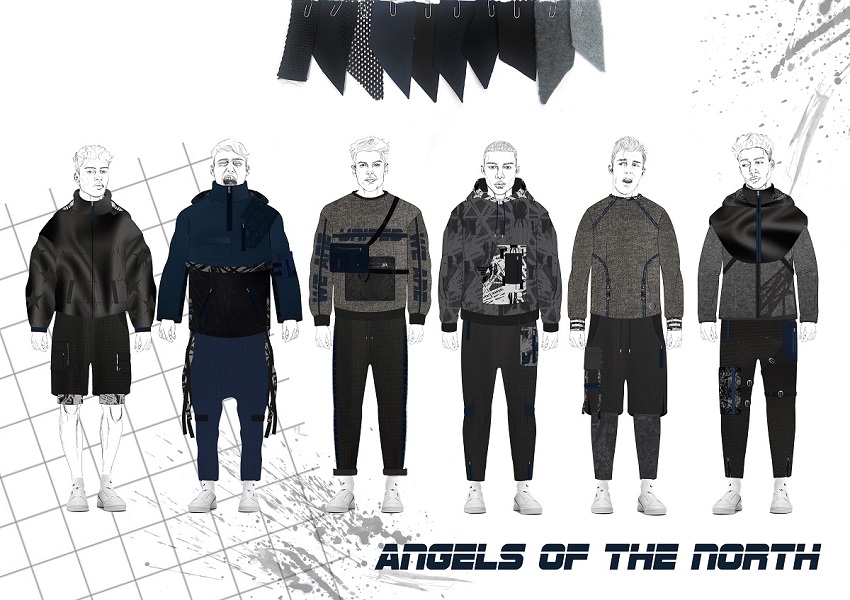 Megan said: “Both my brother and dad are NUFC fans and I was inspired by the supporters and their passion for the club.

“I created six outfits which were made up of jackets, hoodies, long shorts etc, for an Autumn/Winter collection.

“I’ve loved my time at University and feel prepared to go into the job market with confidence following my three years. Ultimately, I would like to become a full-time menswear designer.”

Rachel Davison-Emmot, from Marley Pots in Sunderland, has been studying Fine Art.

The 23 year old has been combining a passion for bee-keeping with her love of art to create her final year piece.

Rachel said: “I’d wanted to be a bee-keeper since I was 15 – I actually wanted a duck, so the bees were a compromise.

“I keep them in my back garden and I’m fascinated by them, the way they communicate with each other, they have their own special language.”

The photographs that make up Rachel’s Degree Show work reflect this unique species and demonstrate how they work together to create something special.

Rachel added: “My dream is to make a career out of bee-keeping.”

Illustrator Muthiur Miah is hoping his collection of work looking at the theme of Islam will impress audiences.

The 23 year old from Blyth has created an illustrated book, as well as a number of images which depict his feeling, hopes and messages.

Muthiur said: “I wanted to do something personal, something which reflects a subject that is important to me.

“Thanks to the University and the Illustration and Design programme I have learned a lot about myself as an artist. Getting the opportunity to pull together a book of my own illustrations has really made me consider a possible career in book publishing.”

Andreas Irakleous, 24, who is originally from Cyprus, has been studying Animation and Games Art at the University for the past three years.

For his final piece, Andreas created a mini games library with the aim of bringing together up to four gamers at any one time.

He said: “Originally the plan was to create something around virtual reality, but then lockdown happened and I had to adjust things slightly.

“Players can take part on dodgeball, archery, we even created a mini-golf island. I’m a gamer myself so really wanted to create something unique.

“I picked to come to Sunderland because of the programme they offered. I also wanted to be in an environment away from London, somewhere less chaotic. My plan is to stay and work in the UK.”

Graphic Design student Jamie Walton, 25, from Middlesbrough, has turned his passion for tea into his Degree Show piece.

Working with fellow students Marta Brito and Mateusz Janas, the team came up with the concept of creating a ‘tea museum’ looking into all different aspects of the UK’s favourite drink.

Jamie said: “We looked at tea from every angle, and I examined the history and culture surrounding the drink.”

The team created images and models of what the museum would look like as part of their final submission.

Jamie added: “University life has been great and I would like to go on and open my own design agency.”

Iona Stock, 21, has been studying Glass and Ceramics at the University.

She said: “I came to Sunderland because it had both glass and ceramics, a small class size so there were more tutors and taught time as well as a close knit community within the course.

“My work is informed by neuroplasticity - the brain’s ability to transform by changing its neural pathways by reacting to situations and experiences. This capacity enables development throughout life and encompasses many aspects of change from recovery from injury to haptic feedback - development brought about through working with the hands."

“After graduation I will be working with artists Joanna Howells and Richard Heeley. I will also be going travelling around the world stopping by universities to research into master courses.”

Sir David Bell, Vice-Chancellor and Chief Executive of the University, said: “None of us would have imagined, even a mere few months ago, that this year’s degree shows would be held in the midst of such extraordinary circumstances. However, I pay tribute to our students for the magnificent way in which they have adapted and been able to contribute such high-quality work to this year’s online shows. Their resilience has been admirable and that will, I know, stand them in good stead as they enter the world of work.

"I would also like to thank all of our staff who have made this year’s degree shows happen. Their commitment to our students has been exemplary and speaks volumes about the community spirit here at the University of Sunderland."

Professor Kevin Petrie, Head of the School of Art and Design, added: "We had planned to open our degree shows in Sunderland Museum, National Glass Centre and our Priestman Building, but of course that's not been possible. In response, we have developed a brand new website, sunderlandcreatives.co.uk, to share the work and creativity of students, graduates and staff from the Faculty of Arts and Creative Industries here at the University of Sunderland.

"As part of this we are presenting an online ‘degree show’ that celebrates the work of our art and design students. Our students (and staff) have had to quickly adapt to new ways of working online and I think this has really highlighted some of the positive attributes creative students develop on their degrees. I’m thinking about: creativity and imaginative; resilience; the ability to communicate in a range of formats and importantly the ability to work with ambiguity, uncertainty and unfamiliarity. These will be great qualities for our graduates’ careers. We’ve also linked with Createbritain.com which brings together and promotes British Design and Creativity. Our students will have profiles on this to promote their work nationally.

"I’d like to congratulate our students, and staff, who have quickly been able to adapt to the new situation and still find powerful ways to communicate their ideas. When you get to look through the site I hope you’ll agree that there’s a really diverse and exciting range of work to be seen."

All the work can be viewed here from 12 June.