As energy bills and food prices continue to rise across the UK – an art student is using her creative talents to highlight the impact of the cost of living crisis as part of a University of Sunderland exhibition.

Laura Clark’s ‘Food for Thought’ installation features a pyramid of tinned food which she has relabelled with various statistics, such as 1 in 10 parents skip meals to afford food for their children and 1 in 7 people were employed whilst they were using a foodbank.

Laura, 18, from County Durham, hopes her project will inspire people to reflect on the seriousness of the cost of living crisis and be more empathetic to those who are struggling.

Visitors to the installation, which is being displayed as part of the University’s final year Degree Shows, can also take away a tin and any leftover will be donated to the foodbank at Bethany City Church in Sunderland.

Laura, who is studying a Foundation Diploma in Art Design and Media Practice at Sunderland, said: “The labels displayed are also there for people to take away and apply to their own tins, to remind them of the current situation and their possible privilege, and perhaps encourage action to support foodbanks.

“I am interested in the idea of the audience as an active participant, contributing to eradicating the issue, rather than a passive viewer. I want people to appreciate the precariousness of the situation and to inspire empathy.” 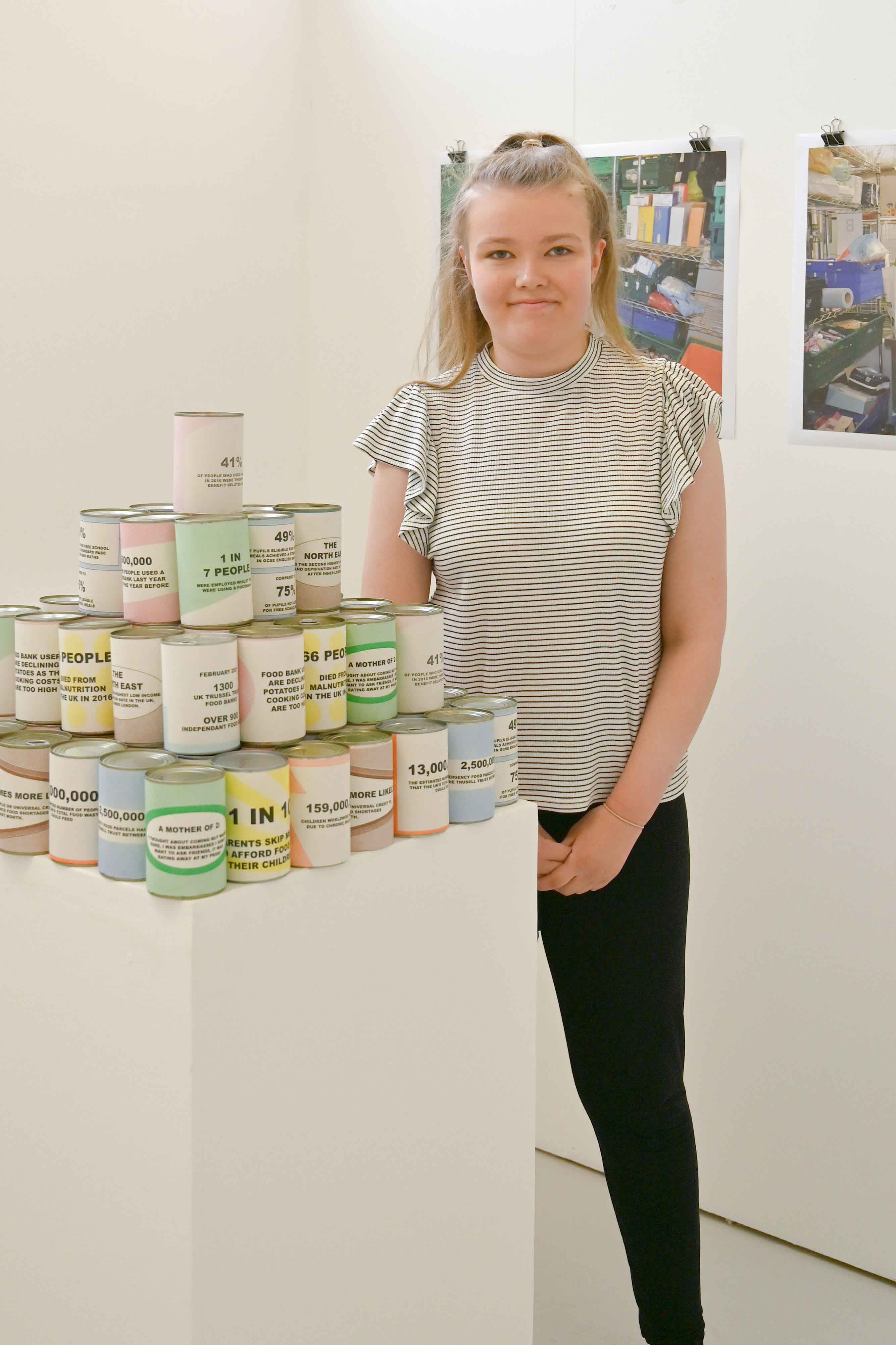 Laura added: “Poverty is rarely addressed in art despite it affecting real people on such a large scale. As someone who thinks of art as having the potential to bringing about change, I think there is a need for poverty to be addressed visually in the art world.”

For the last two years, the Degree Shows have been held online due to the COVID-19 pandemic – but this Saturday (June 11) the exhibitions will open to the public again as students show off their creations at venues across the city.

Professor Kevin Petrie, Head of the School of Art and Design at the University of Sunderland, said: “Even though our online showcases were really successful, it’s great to be returning to live Degree Shows this year.

“It’s also really exciting to be showcasing our students’ creativity across three venues in the city: National Glass Centre, the University of Sunderland’s Priestman Building and Sunderland Museum and Winter Gardens.

“Visitors to the shows are going to see an amazing diversity of themes and ways of working but what unites all of our students is a passion to comment on, reflect and change our world.

“These shows are going to be a great platform for their next steps into creative careers.”

Other talented students having their work exhibited include:

Nasiba is among of a number of international students travelling to Sunderland from Tashkent, Uzbekistan, to take part in this year’s Degree Shows.

Her collection ‘Pretty MisMatch’ is a celebration of uniqueness and individuality.

Nasiba, 23, who is studying Fashion Product and Promotion through the University’s partner MDIS, said: “In a world of "influencers” a lot of us are vulnerable to losing our own sense of individuality.

“A lot of us become depressed just because we are insecure about not being or looking like someone else, but, in reality, we just need to find and discover our own authentic self.”

Hulya, 22, said: “Think of the ability to bring one thing that is no longer needed back to life. That is the purpose of up-cycling.

“With fashion trends dying out so quickly and having negative effects like overconsumption, we need to think of different ways to reuse what we already own. Inspired by this method, I was able to create my six-silhouette collection.”

Hulya is currently focusing on opening her own fashion studio in Romania.

The 21-year-old’s artwork ‘Homo Sapiens’ is a life-size glass human skeleton covered in 22 karat gold which questions the importance of objects in today's society. 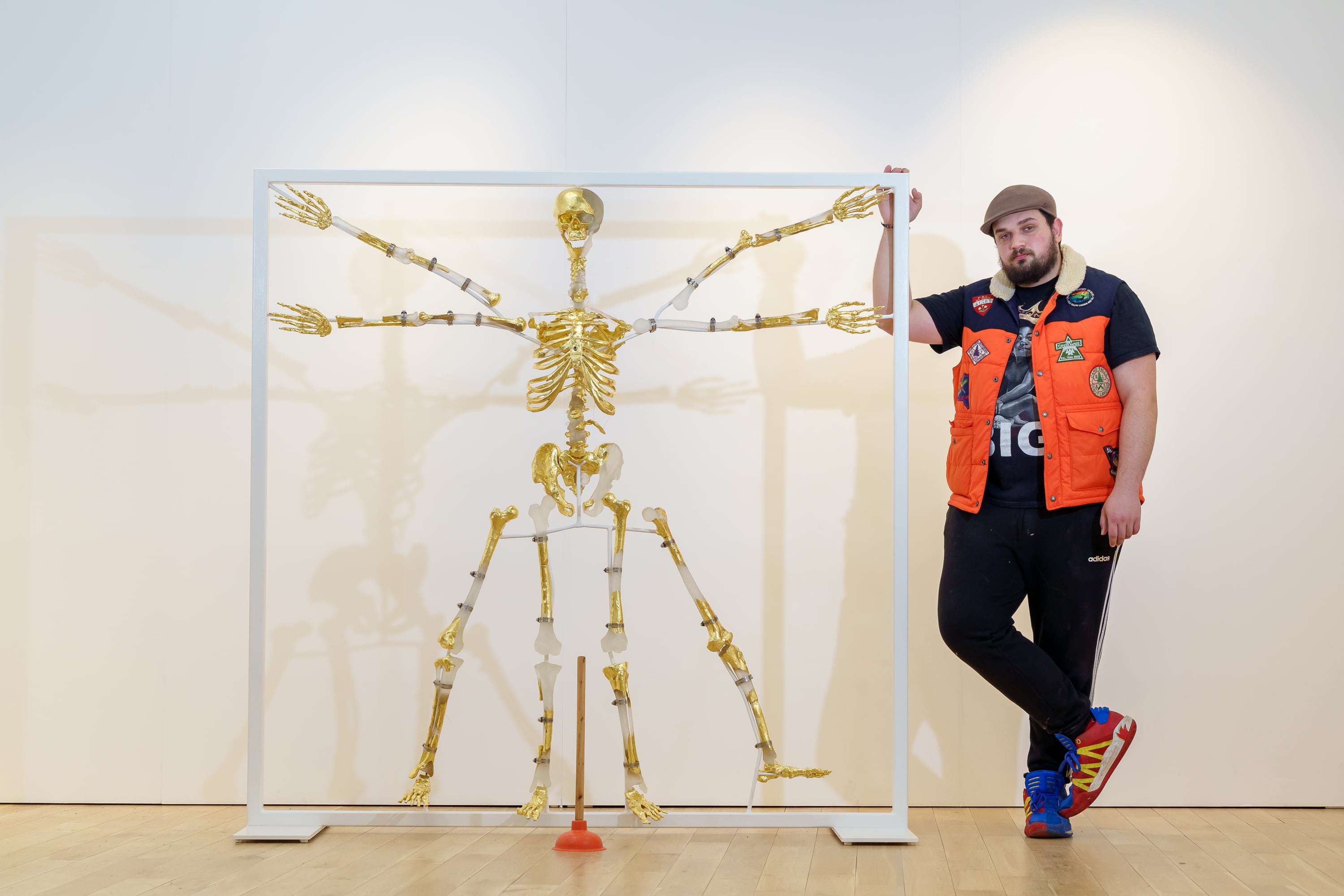 Originally from Portugal, Rodrigues moved to Scotland when he was 18 and worked at the Powderhall Bronze foundry in Edinburgh which offers a place for artists to create work as well as carry out restorations and conservations. Around two years later, Rodrigues joined the Glass and Ceramics programme at Sunderland.

Originally from Northern Denmark, 28-year-old Emma trained as a glassblower in Sweden, Denmark and France before settling in the north-east to pursue her career as an artist.

Her piece ‘endogeny’ is based on the autobiographical notion of personality existing in layers, created by natural cycles and the juxtaposition of external and internal expectations and societal influences.

Using a colour palette based on the Jungian interpretation of alchemical processes, ‘endogeny’ is a study of form in respect of the artist’s mind and considers her relationship with society.

With support from the University’s Enterprise Place, Emma has set up her own glassblowing business, emr studio, which she intends to run full-time after graduation.

Emilia’s visual journal ‘The Face of Justice’ highlights the stories of multiple men and women that have been wrongly convicted of crimes that they did not commit.

The piece contains several case studies Emilia has drawn and created artwork for, telling their stories through powerful imagery.

“I was inspired through an avid interest in true crime and the motivation to highlight the injustices these people have faced,” Emilia, 26, from Sunderland, explained.

After graduating, Emilia plans to further develop her skills in the design industry while continuing to create portrait art for personal and commercial purposes.

Pav’s project ‘Existence in Silence’ explores the solitary part of human existence and the difficulties we encounter in expressing complex or more difficult inner thoughts.

“I have been examining ideas of mortality,” Pav said.

“The work investigates the human experience of consciousness and the distortions between it and the subconscious mind.”

Pav, 26, was born in Poland and has lived in UK for 16 years. In the last year of his degree, he has been commissioned to make a video documentation for the multi-media artist Vinca Petersen. The resulting work has been included in her exhibition ‘Make Social Honey: A Collective Search for JOY’ at the Northern Gallery for Contemporary Art in Sunderland.

Following graduation, Pav intends to continue his studies with a Master’s degree at Sunderland, putting him a step closer to his career goal of becoming a director of photography.

Abbey, from Sunderland, joined the Illustration and Design programme as a mature student after encouragement from family and friends, choosing the degree because she says it covered a broad spectrum of methods and practice.

The 32-year-old’s project features a large rug that focuses on mental health, in particular the guilt and pressure people feel relating to their perceived productivity.

The rug took around 40 hours to create and measures almost a meter-and-a-half.

“Usually, I work with scissors and produce very small paper cut illustrations, so it has been incredibly rewarding to produce something on a way larger scale," Abbey said.

After graduating, Abbey hopes to stay on at the University and study a Master’s degree, alongside selling her own designs and continue working on a collection of large-scale rugs and wall hangings.

Milo’s display ‘Bureau of Grim’ is the first chapter of an animated webcomic which follows characters of different sexualities, genders and racial backgrounds as they travel through the afterlife as grim reapers and demons.

The story is inspired by a range of beliefs in the afterlife combined with modern fantasy often seen in graphic novels and Manga – and is also something close to Milo’s heart.

The 21-year-old, from Stockton-on-Tees, explained: “I wanted to create a story that represents LGBTQ+ people in the media without demonising or sensationalising them for just existing.

“As a queer transgender person myself, it was important to have these characters be the focus of the story because of how little the animation industry has featured people with identities that aren't cisgender-heterosexual without vilifying them through queer coding or making them a joke.”

Milo plans to become a character designer in the animation or games industry while continuing to work on ‘Bureau of Grim’ in his spare time.

More information on this year's Degree Shows, including when and where to see them, can be found here

Students’ work will also be shown online at sunderlandcreatives.co.uk